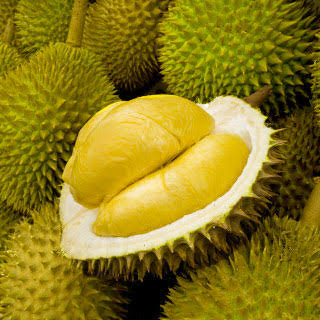 Durians are the most famous of Malay­sian fruits due to their powerful aroma, distinctive taste and custardy texture. The famous 19th century naturalist, Al­fred Russel Wallace said ‘to eat durian is a new sensation worth a voyage to the East to experience’. 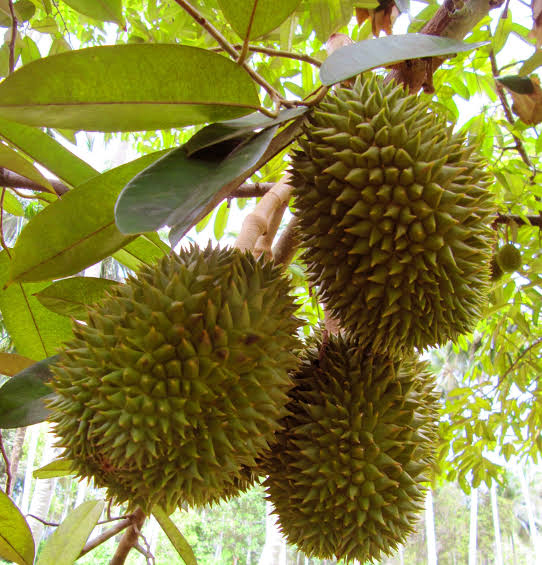 The most sought after variety is the Musang King, with a creamy texture, smaller seeds (therefore more flesh) and a slightly bitter, fermented after­taste. Durians in Malaysia are harvest­ed by collecting them from the ground after they have fallen from the tree. Watchmen or boys are often stationed in small palm thatch shelters to keep an eye on their valuable crop.

Following the inking of the new pro­tocol, Malaysia’s first exports of fro­zen whole fruit durians occurred on 17 June, with five companies approved to export the fruits to China, said Sa­lahuddin Ayub, the minister for agri­culture and agro-based industry, in a statement announcing the exports.

Last year, Malaysia’s durian output in­creased by 61.9% to 341,000 tonnes from 211,000 tonnes in 2017 and is expected to increase in the following years, particularly premium varieties such as the Musang King and Black Thorn.

UKAA’s commercial partners are cur­rently in negotiations with Malaysia to source the best areas across Africa to grow Durian. The ideal conditions to grow Durian, as the Durian experts have reasons to believe, are certain areas in Africa which have the perfect climate to grow this magnificent fruit. The end goal is for Africa to become a competitive exporter of this increas­ingly popular fruit.

The potential revenue that can be gen­erated and the job creation prospects are enormous, as are the benefits to Kingdom communities and countries that will have the ability to grow this incredible product.

What is durian fruit?

Durian is a tropical fruit distinguished by its large size and spiky, hard outer shell. It has a smelly, custard-like flesh with large seeds. There are several varieties, but the most common one is Durio zibethinus. The fruit's flesh can range in colour. It's most commonly yellow or white but can also be red or green.

Durian grows in tropical regions around the world, particularly in the Southeast Asian countries of Malaysia, Indonesia, and Thailand. The fruit can grow up to 1 foot (30 cm) long and 6 inches (15 cm) wide. A typical durian fruit has about 2 cups (486 grams) of edible pulp.

How is it used?

Durian is used in sweet and savoury dishes. Both the creamy flesh and seeds are edible, though the seeds need to be cooked.The flavour is described as tasting like cheese, almonds, garlic, and caramel all at once. 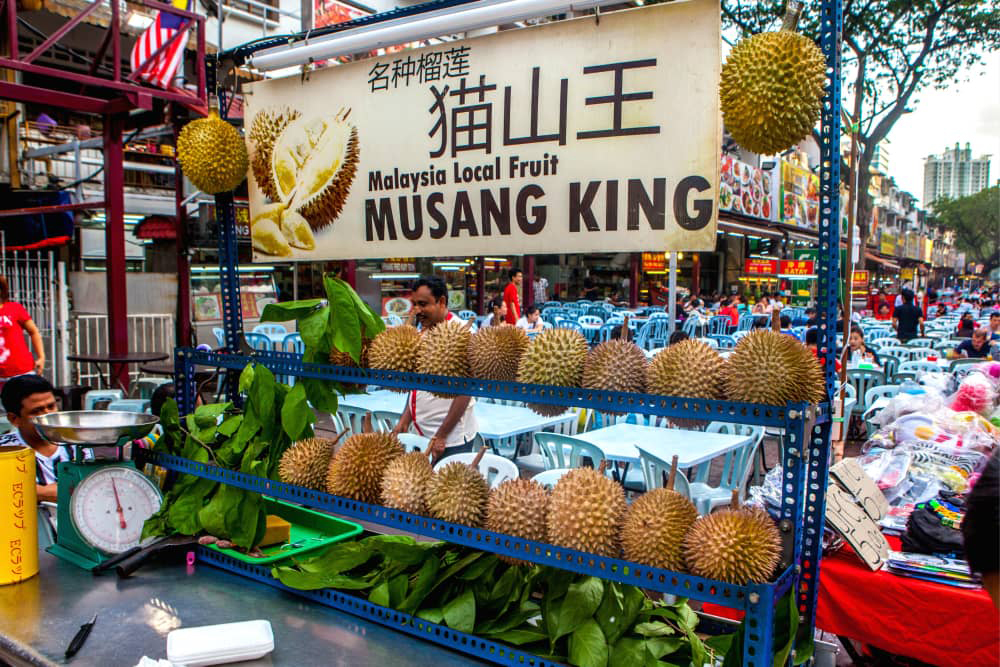 It’s also used in traditional medicine and has some medicinal properties that are currently being studied. One of the most nutritious fruits Durian is very high in nutrients compared to most other fruits.

This nutrient profile makes durian one of the most nutritious fruits worldwide. It’s also rich in healthy plant compounds, including anthocyanins, carotenoids, polyphenols, and flavonoids. Many of these function as antioxidants (2Trusted Source).

All parts of the durian plant — leaves, husk, roots, and fruit — have been used in traditional Malaysian medicine to treat various illnesses, including high fever, jaundice, and skin conditions (2Trusted Source). Studies suggest that durian fruit offers the following health benefits (2Trusted Source, 3Trusted Source): • Reduces cancer risk. Its antioxidants may neutralize cancer-promoting free radicals. In one test-tube study, durian extract prevented a strain of breast cancer cells from spreading. • Prevents heart disease. Several compounds in durian may help reduce cholesterol levels and your risk of atherosclerosis, or the hardening of your arteries. • Fights infection. The rind contains compounds that have antibacterial and anti-yeast properties. • Lowers blood sugar. Durian has a lower glycemic index (GI) than many other tropical fruits, meaning it may spike blood sugar levels less.

While these studies show promise, many have been done on animals or in test tubes. No solid claims can be made until the health benefits of durian have been confirmed by controlled studies in people.

How to eat durian 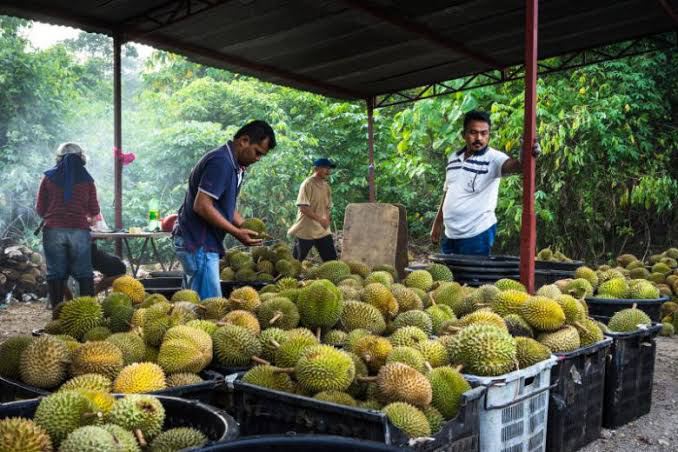 Opening a durian's hard, spiky shell often requires gloves or mitts to protect your hands. You need to cut the shell with a knife and pry it open with your hands before gently removing the durian flesh. You can then eat it fresh on its own, paired with sticky rice, or as an ingredient in various dishes.

You can find tutorials on how to open a durian fruit, as well as many recipes, online. The flesh is also sold frozen, which slightly changes its texture, making it looser and more stringy.

Durian is also used in prepared foods, such as candy. Yet, while this may give you a sample of its flavour, it won't provide you with the health benefits.

Why does it smell so strongly?

Opinions are mixed about durian's smell. Some people love it, while others hate it. The smell is very strong and has been described as a combination of sulfur, sewage, fruit, honey, and roasted and rotting onions. A study on the aromatic compounds in durian found 44 active compounds, including some that contribute to scents of skunk, caramel, rotten egg, fruit, and soup seasoning (4Trusted Source).

The fruit's smell is so potent that it's banned in many hotels and public transport systems in Southeast Asia. Your impression of the fruit depends on whether you smell the sweet-smelling or stinky compounds more strongly. 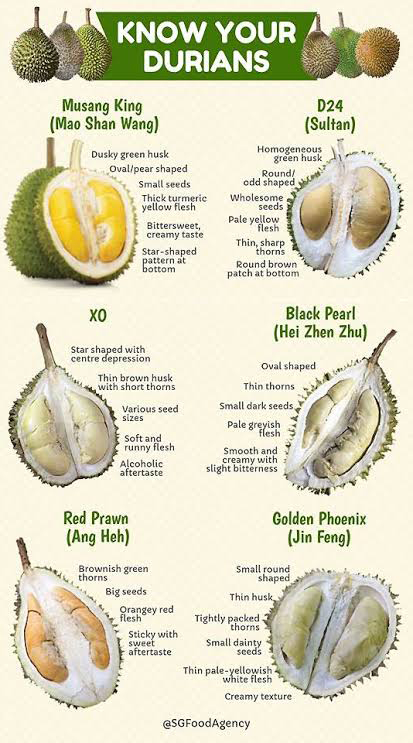